30 March was called as a National Day of Action Against Sanctions by Unite the Union. As we fight sanctions outside the buroo every week, we thought this was an opportunity to do something different – so, we set up stall in Dundee City Centre to say loud and clear, with the help of the megaphone, ‘No to benefit sanctions, YES to Independence’ and the freedom to get rid of sanctions altogether.

We generated a good amount of interest (including with a big bunch of school kids), and if we didn’t get out as many leaflets as we had planned it was because people wanted to stop and discuss – to discuss Independence, and to discuss their personal experience with sanctions. We were able to give out advice on fighting sanctions too, including to two separate homeless guys.

I have pasted the wording of our leaflet below.

(Thanks to Chris, Duncan, Dave, Norma, Gordon and Jonathan) 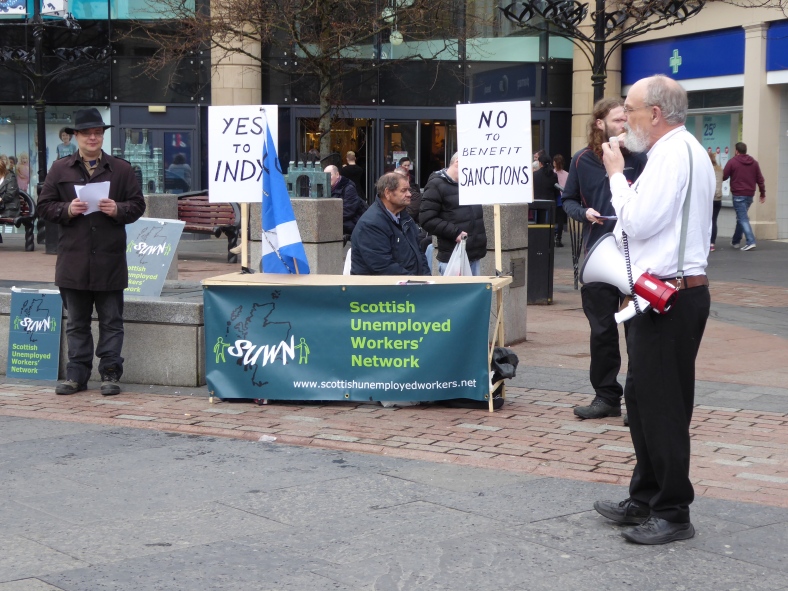 Today, across the UK, people are protesting against benefit sanctions. The UK Government is turning our welfare state into a system of control and punishment. If people on benefits don’t do everything they are told, then they can have their benefits stopped and be left destitute. Often this happens without them having done anything out of place. And just the fear of sanctions creates constant stress. The stories we hear from the people we help at our stalls outside Dundee Buroo would melt the hardest heart – and raise the gentlest person to indignant anger. Today’s protest says that this system is completely unacceptable.

Sanctions, like most of the benefit system, are reserved to Westminster; and the Tory government shows no signs of letting up on their attack on the welfare state. But we in Scotland have the opportunity to win the freedom to create a better system. With Independence we would no longer have to fight a rear-guard action against a continuous onslaught from the DWP. We could be looking at the end of sanctions and of computer-based disability assessments. We could be looking forward to the future introduction of a Universal Basic Income.

We want to make sure that welfare is at the centre of the Independence debate – to raise people’s expectations, so that when we win we can demand a real difference. We are campaigning for nothing less than a fairer Scotland, which would also provide a source of hope beyond our borders.