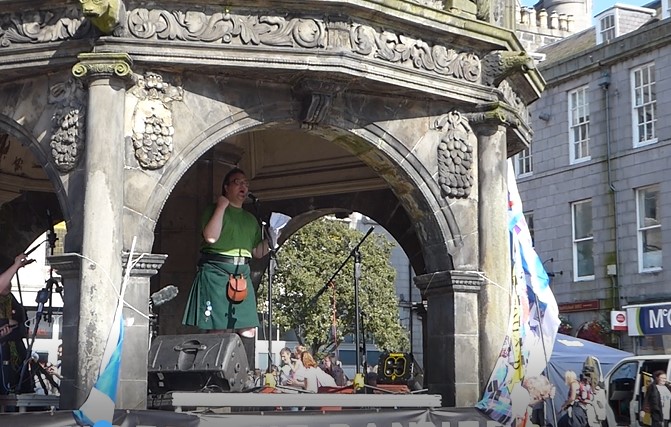 The Indy marches and rallies achieve three things. They rally campaigners with a shared, uplifting, and enjoyable day out; they ensure the Indy cause remains firmly and visibly on the map; and they provide an opportunity for the grassroots Indy movement to make clear that Indy must be more than a change of flag. Yesterday’s speakers all talked about the opportunity to create a better, fairer Scotland – including a powerful anti-establishment speech from Veterans for Scottish Independence. There were speakers from CND, Extinction Rebellion, and Catalonia. Sarah gave a message of international solidarity, and Duncan gave his first public speech for the SUWN, which you can watch below (introduced by Tony who was compering the rally).

We took through a minibus of marchers aged under 6 to over 60, and we handed out 500 leaflets with our message for radical change and solidarity. For those who didn’t get one, this is what they said:

The SUWN has supported independence since before the 2014 referendum. We have always argued for the need to look after our own affairs through a totally independent Scottish parliament; but this is only part of the story. We also have to make sure that our independent Scotland is run by and for ALL its people, and isn’t just a smaller echo of the elite politics that we are escaping from. We don’t want Edinburgh aspiring to compete with the City of London, while a whole section of the population is priced out of a decent life. We don’t want an economy that sacrifices the common good and the future of our planet for the sake of private profit.

We know that most people who support independence do want to see an independent Scotland that creates a fairer society, and we call on everyone to make this demand central to the independence campaign. It is no use claiming that we can think about what sort of Scotland we want later. History is full of examples of movements that have put aside demands for wider social change till after independence, only to find themselves dismissed and side-lined once independence was won.

We don’t just want a change of flag. We want to make a better society – where there is no need for an unemployed workers’ network.

We are also very aware that winning a majority for independence will only be part of the independence process. There are a lot of powerful institutions that don’t want this to succeed – we were only ‘allowed’ a referendum last time because they were sure we wouldn’t vote yes. We hope the Scottish solution is constitutional and peaceful, but we have seen how painful independence struggles can be.

As supporters of independence and the right to self determination we want to express our solidarity with others who have campaigned for the right to run their own lives and enjoy their own culture, only to be met with brutal suppression by bigger nations who deny them their separate identity and exploit their resources.

Palestinian flags have long been welcome on Indy marches. This last fortnight, the world became more aware of the situation of the people of Kashmir, as India formalised decades of violent repression by unilaterally ending Kashmir’s constitutional autonomy, arresting politicians and human rights activists, and cutting off all forms of communication. In the SUWN we have been active in supporting the Kurds, who have combined their struggle to express their cultural identity, with the struggle for a better form of society.

In Northern Syria, the Kurds used the political vacuum created by the civil war to establish an autonomous region based on a bottom-up democracy, which emphasises women’s rights and a multicultural society. Its grassroots politics and community values provide a model for everyone looking for an alternative to our greed-based system. Almost as soon as they had begun to get this established, they were attacked by ISIS. Now that they have successfully fought back, and liberated large areas of Syria at the expense of thousands of young lives, they are being threatened by the full force of the Turkish army, the second biggest army in NATO. Their fate depends on the political machinations of Turkey, the US, Russia and Iran – all of them in Syria for their own selfish interests.

By making more people aware of the Kurds’ position we can try and make it a little bit harder for these new imperialists to wipe the Kurds from the map.

You can check out what is happening on anfenglishmobile.com

Use www.writetothem.com to ask your MP to raise the issue of the Turkish threat in parliament, and to demand the Kurds be given a say in their own future.

And find out what is happening in Scotland on 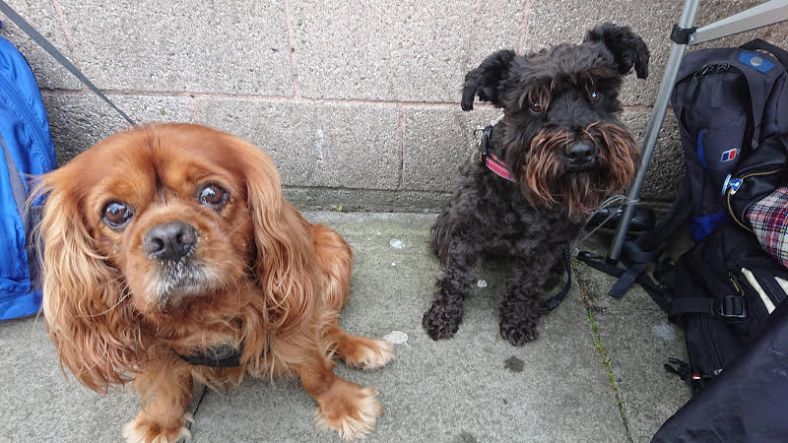 We make no apology if these blogs are often grim reading. We write this record of our experiences to inform both those in similar situations and a wider public, and to serve as an archive for the future. Reports from the stalls are a record of what is happening as a result of UK Government policy. At this week’s stall we were joined by Brandy and Trudy, two affiliate canine members of the group.

Connor has a mobility disability and is being shifted from Disability Living Allowance to Personal Independence Payment. This is happening nationwide, and it seems to have struck our local area a lot recently. Connor is one of a number of people we have spoken to about their move from DLA to PIP. As ever, we gave the standard advice: get someone to help you fill in the form, and get someone to go into the assessment with you.

Alison is also moving onto PIP. She is being helped by Citizen’s Advice (CAB) to fill in her forms. Unfortunately, CAB is over-subscribed and her appointment with them falls two days after the form’s deadline. She will need to ask the DWP for an extension. (Unlike for Work Capability Assessment claims, two-week extensions can be given for PIP fairly routinely, but this is a worrying situation.) Alison took one of our leaflets, and may ask us to accompany her to the assessment, as CAB doesn’t do that bit.

We also advised Sean that he could be eligible for PIP. He’d left his driving job due to health problems. His former employers agreed that he couldn’t do his job. The DWP, however, had assessed him as ‘fit for work’. He took the case to a Mandatory Reconsideration, which failed. Sean is now getting help to appeal the decision. In the meantime, he has no savings, and will have to apply for Universal Credit. (You can only get contributions-based ‘New Style’ JSA for 6 months after you have left work) We also advised him to apply for PIP.

Michelle is on New-Style ESA. However, this does not cover her housing costs, and she had to apply for UC as well to pay her rent. Due to the delays in her UC, she had to get an initial loan. Repaying the loan has left her very little actually to live on. We suggested she apply to the Scottish Welfare Fund, as that might ease her financial situation.

It can get tedious giving out the same information again and again to different people. What is particularly frustrating is that this is often basic information that the Jobcentre/DWP is either not telling people, or getting wrong. It is gratifying therefore to hear the words of people like Harry. Harry is a new Universal Credit claimant. As he was going in, he took one of our leaflets and simply said, “It’s reassuring to know that there’s someone helping people.”