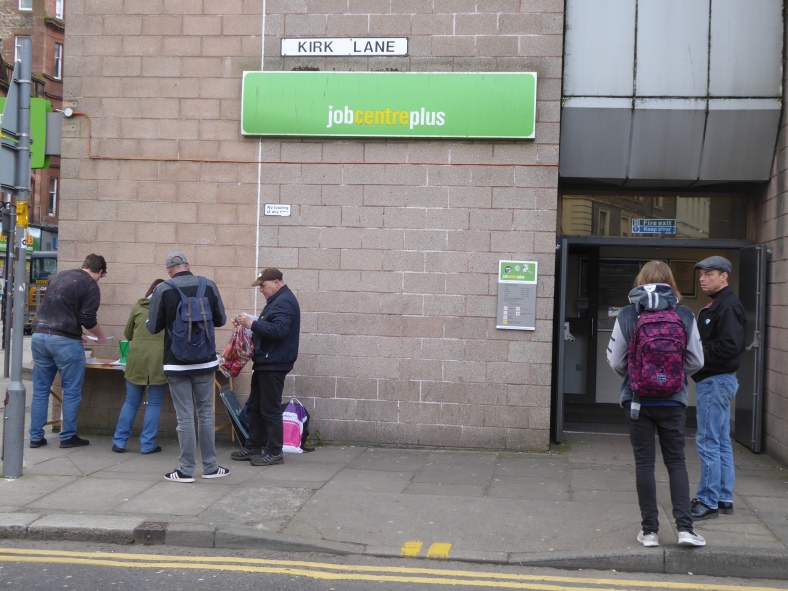 Ann had had no payments since December. They had just stopped without explanation. When we met her coming out of the jobcentre she had finally discovered the likely source of the problem. Her records still contained an address she had not lived in for 12 years, as well as her current address. Any appointment letters sent to her former home would not have reached her. It looks as though she had missed an ‘appointment’ she had never known about, and her benefit had then been stopped. Despite this being another DWP mistake, they were adamant that she would not be able to get the money back. She seemed to be pretty determined not to let them get away with that.

In addition, as she had been unemployed for more than six months, Ann was having to move from contribution-based JSA to Universal Credit. She had brought all the various documents that the jobcentre had requested in order to process her claim, but she had just been told that since they had spent her allotted twenty minutes sorting out her previous problem, the processing of the documents would have to wait until her next appointment. Ann has some savings, so is now only signing on to get her National Insurance paid, but this sort of inefficiency can cause a delay in vital payments.

Drew and Katie were worried that they were going to be seriously short of money for their growing family. Katie is pregnant with her fourth child and they are about to move in together and make a joint claim. Drew is on ESA but had been told by the jobcentre that this change would mean a move to Universal Credit, where they would be hit by the two child policy, and not get any help for numbers three and four. We were pleased to be able to tell them that this rule is not coming into play until the end of October, and that until that time any benefit applications made by someone with three or more children will be done in the old system. They photographed the relevant page in the CPAG handbook to help them make their case to the jobcentre.

Craig and Haley had also been told that they had to move to Universal Credit. In their case the only change in their circumstances was a change of address. We told them that this should not require them to change benefit, and that there was an article about a court case that demonstrated this on the Universal Credit page on our website. And we advised them to get help arguing the point.

As so often, we also found ourselves talking with people who had been found ‘fit for work’ and no longer eligible for ESA. If you are on Universal Credit while waiting the result of a Mandatory Reconsideration or an Appeal, you are very much at the mercy of your ‘work coach’ when it comes to what you are expected to do by way of looking for work. But it also helps to have an understanding GP. In Universal Credit, you are only eligible for 2 periods of 2 weeks off for sickness in a year, but you can request your GP to write and ask that you be given only restricted activities, and to include medical evidence as to why you should not do more. How the ‘work coach’ responds to this is at their discretion, but they are (as always) supposed to be reasonable. If you think they are not being reasonable you can’t appeal, but you can (with help) take the issue to judicial review.

Most of the Universal Credit problems we have helped with have involved sorting DWP muddles, but even when everything runs as it is supposed to, many people are left in serious difficulties. Recent UK statistics show a 50% rise in foodbank use in areas that have gone over to Universal Credit, and ¾ of all housing association tenants on Universal Credit are in rent arrears.

Thank you for helping on the stall to Tony, Norma, Gary, Dave and Taylor. 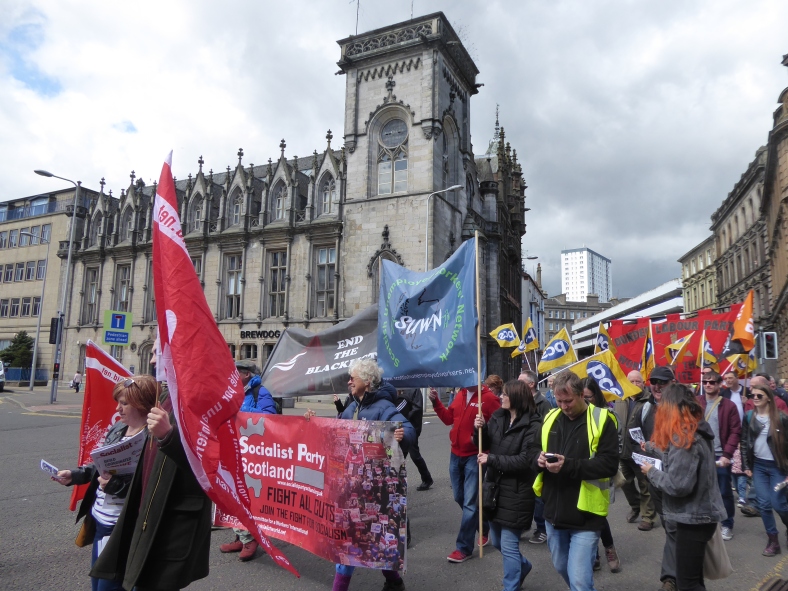 On Saturday we took part in our seventh Dundee May Day march. As we observed in our leaflet:

The good news is that more people are waking up to what is happening. The bad news is that, even so, there have been no mass protests. If you think that no-one should need to rely on a foodbank in one of the wealthiest countries in the world, come and join us.