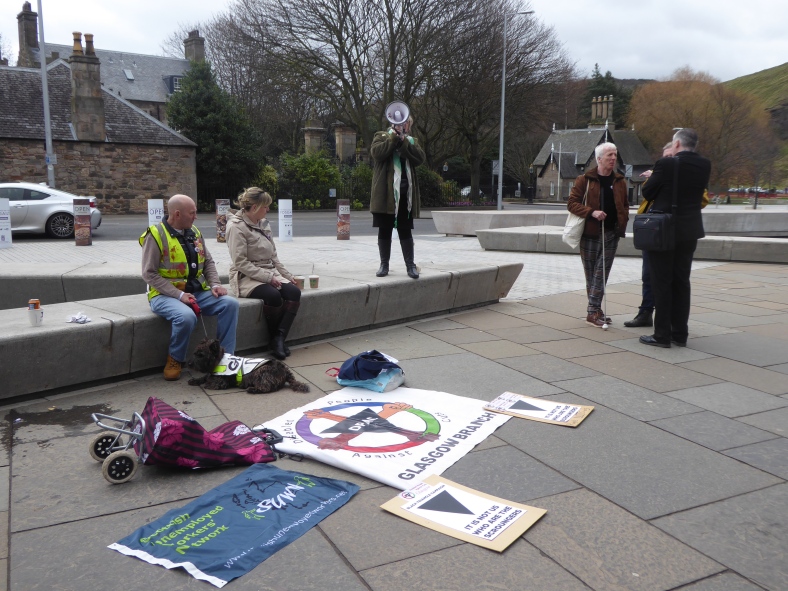 As the Minister for Work and Pensions, Esther McVey, rushes back to Westminster to be in time to vote for war, will she pause to ask herself why her session with the Scottish Parliament Social Services Committee got interrupted four times by angry interventions from the public? As she clearly inhabits a different reality to the rest of us, the reasons may yet elude her, but media reports of this morning show that most observers have no problem recognising the cause of our anger.

First up and thrown out was David from Class War, who called out “you can’t get into work if you’re dead”, before asking about a woman who had committed suicide after being refused ESA. Video

Regardless of the questions she was asked and the evidence that MSPs quoted about the cruel impacts of the benefit changes, McVey insisted that the results of Tory policy had only been positive, presenting a picture of a system finely tuned to meet the personal needs of those who used it. Even when questioned about the ‘rape clause’, she tried to twist this into a positive light, claiming that having to say what had happened to them ‘could give [women] an opportunity to talk about, maybe, something that has happened that they never had before so it is potentially double support.’ This was the point where I walked out – claiming to see a flying pig out of the window. Video

We were soon joined outside by Marion from DPAC, who had told McVey just what she thought of her, and then Sarah Scott, who also asked her about benefit claimants attempting suicide.

The MSP’s kept up a veneer of politeness, but were clearly unimpressed by McVey’s propaganda, and we appreciated that the two SNP members who spoke came out to talk with us afterwards.

Glad to have been an ‘angry outburst’ (BBC).

One thought on “Sending McVey homeward to think again”