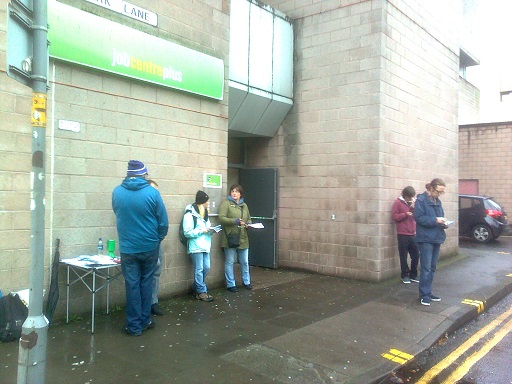 Despite his ‘glass half full’ attitude, it turned out that George, a 63 year old ex-trawlerman and HGV tyre fitter, is far from ‘arite’. After nearly fifty years of heavy labour, his body is starting to give up on him – the pain from the serious degeneration of his lower spine was etched on his face, and when he dropped our advice leaflet and attempted to bend down and pick it up, he did so in stages and almost fell over with the effort. Despite his obvious disability, George is on Job Seekers Allowance (JSA) – the question of George moving onto Employment and Support Allowance (ESA) had never been raised by  his ‘work coach’ (sic), who, instead, only appeared interested in whether or not he had met his job search commitments. As he said himself, George is very much ‘auld school’ – he ‘disna like the idea oa being idle’, but he reluctantly admitted to being torn between missing work, and knowing within himself that he really couldn’t cope with the demands of tyre fitting. He was also worried that taking heavy labouring work – the only kind of work he has ever done – would only worsen his already serious and degenerating health; which begs the question, what is the role and duty of care of the DWP in a situation such as this?

Unfortunately, watching out for folk like George, who desperately want to work but are in no condition to do so, seems a distant second for the DWP who, instead, prioritise ticking boxes and meeting targets. After further discussion, George agreed, rather reluctantly, that he should really be on Employment and Support Allowance (ESA), and we provided him with details of local welfare organisations that would be able to guide him through the application process, along with our own contact details in case he has further problems. This is a man who had always worked and had never asked for anything from anyone, but who now realised that he was at the end of his working life. He does not and cannot not know what the future has in store for him. He was, though, aware that his optimism and openness was costing him in his dealings with a DWP that has become nothing more than a gigantic meat grinder.

We also met Helen, in her fifties and suffering from severe depression as well as a number of other physical health conditions. However, she had recently failed an ESA Work Capability Assessment (WCA) and was now on JSA. She had not been able to attend a recent DWP appointment due to ill health and, despite having a sick note form her GP, had just learned that she had been sanctioned for 48 days.  Helen is receiving hardship payments, but explained that this latest sanction had followed earlier ones, leaving her in mounting debt and making her already serious depression even worse, thus highlighting the emptiness of the Tories’ apparently heartfelt pledge to treat those suffering from mental health problems with understanding and fairness. The reality is that the Tories’ so-called welfare reforms have created the conditions for the developing epidemic of mental health problems that we are witnessing.

We urged Helen to immediately appeal the sanction, but her response was ‘whit’s the point?’, a regular refrain from those who have been worn down by repeated sanctioning. We explained that if she didn’t appeal, it was highly likely that the DWP would come after her again. They are like bullies, who thrive on the fatalism of those who have been repeatedly forced through the DWP meat grinder – the only way to stop the cycle of sanctioning is to challenge the DWP, which will make them think twice before sanctioning again. And appeal is also likely to lead to a sanction being overturned.

Both Helen and George’s cases are of a kind that we are only too familiar with, and, whilst both underline the fundamentally heartless nature of the so-called welfare reforms, they also pose searching questions regarding the presumed ‘cost savings’ that these are supposed to deliver. It is becoming ever clearer that whilst the DWP’s often brutal approach may be saving pennies, they are also creating much larger long term costs – economic, as well as human – for society as a whole. It is the already struggling NHS that is expected to pick up the pieces as they fall from the DWP meat grinder. And, as sure as night follows day, the developing crisis within the NHS, which has been fuelled by swingeing budget cuts and the Tories’ own ‘welfare reforms’will be used to fuel demands for the further privatisation of English health services (with knock-on impacts in Scotland). Meanwhile, the meat grinder will continue, day after day, remorselessly grinding away. It’s up to all of us to work together to stop it.

Whilst these two cases were the most notable that we dealt with this week, we also dealt with others at the buroo, by phone, through facebook and via email, which we don’t have the space to deal with. Norma, Tony, Jonathan and Kat were involved with this week’s stall.