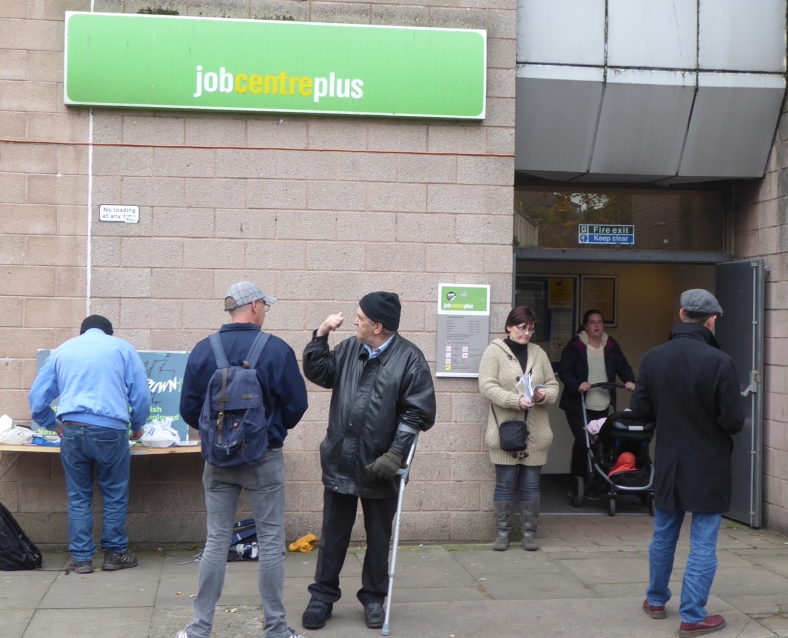 Frank used to work as a driver, but since having a major operation seven years ago he has to get to the toilet at least once an hour, so driving, and many other jobs, are off the agenda. He does want to work, but not to be forced to apply for any job however unsuitable, as his ‘job coach’ is pressing him to do. He is in constant pain too, and the stress of the pressure from the jobcentre is making this worse. As if this was not bad enough, he has been deprived of any effective painkiller. He had been prescribed opiates, but these were knocking him sideways, so he decided to self-medicate with home-grown cannabis. However a neighbour reported him to the police, and although he only had a couple of plants, they took these away along with his growing tent and other equipment. So now he has no pain relief and is having trouble sleeping, even before the pressures from the jobcentre that are making it all worse. We advised him to go to his doctor and get a note for an Extended Period of Sickness, in order to lift the pressure and give him time to get a bit better. We also offered to go into the jobcentre with him if he needed help persuading them to treat him more reasonably and with more understanding.

Arun had just started in work, but was concerned that he was in line for a second sanction from his work programmer provider, Triage. He was already challenging an earlier sanction and had been warned he could be sanctioned again for missing an appointment, even though he had previously told them why he wouldn’t be able to come. We had to warn him that if he was sanctioned again he should still challenge it even though he now has a job, because if the job fell through the sanction would be held over to when he was on benefits again.

We also met with an older man who we had helped in the past and who was now having problems with his benefits being stopped when he had only been given a few hours’ work. His situation is very complicated and we pressed him to go back to the welfare advisor who had helped him before. And a man who was personally delivering proof of his wife’s student bursary because, although he had sent this twice before, the DWP claimed not to have received it, and without it they couldn’t pay him. And another man who had been told he was being made redundant from a job he had been in over two years, only to see his old job advertised two weeks later – which doesn’t sound like redundancy to us. (If you have similar problems you can contact ACAS for advice.)

There has been a post going round social media about a person who was deemed not to have mobility problems because they could manage to struggle to the foodbank and didn’t just stay at home and starve. In a similar vein, we were told about someone who has been informed that she doesn’t have problems going out and meeting people because she manages to get to her AA meetings. Surely that must be enough social life for anyone…

As we head into the big Universal Credit rollout, it has been amazing to watch the media, and even a few Tory MPs, wake up to the scale of the crisis this will cause. Whether this is enough to make Teresa May blink, we don’t yet know, but the appalling extent of the culpable mismanagement of this benefit has been exposed by a DWP whistle-blower in the Independent. The theory behind the staged rollout was that the DWP would learn from the experiences of their first poor guineapigs, but they seem quite determined not to do so. The stories recounted in online support groups are absolutely terrifying, but even worse are the comments by some other group members that demonstrate an acceptance of the idea that you should have to sell off your possessions and live off the cheapest foods and expect no quality of life. No wonder many posters question the point of living at all. We need to ensure that the media don’t forget these issues as quickly as they have taken them up, and that this helps generate the outraged resistance required to bring about change.

Thanks for help at the stall to Tony, Norma, Gary, Dave and Jonathan

One thought on “If you designed a system specifically to inflict pain, you couldn’t do much better than this: a report from last week’s stall”