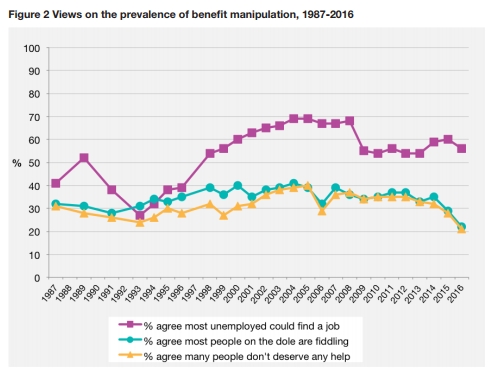 We have always said that with the Tories getting increasingly trigger happy, bringing more and more people into their line of fire as they attacked welfare, so attitudes would change. The latest British Social Attitudes survey suggests this has started to happen. The rigours and hypocrisy of austerity have encouraged people to support an increase in tax and spend, with the percentage supporting more spending overtaking supporters of the status quo for the first time since the financial crash in 2007-8. And when it comes to benefits, the percentage of people who agree with the statement that ‘Many people who get social security don’t really deserve any help’ fell between 2014 and 2016 from 32% to 21%. There was a similarly big drop – from 35% to 22% – in the percentage of people who thought that ‘Most people on the dole are fiddling in one way or another’. Both figures are record lows.

Unsympathetic public attitudes have been used by the UK Government as arguments to support their unsympathetic policies, but these attitudes don’t just happen. They are very deliberately cultivated by government propaganda. The latest survey shows that people have begun to see past all that ‘strivers and scroungers’ rhetoric and become more aware of what is really going on. And this was done before the major political shifts produced by the movement around Corbyn in the recent general election.

Further confirmation of more sympathetic attitudes is provided by the debates on Social Security that have taken place at Holyrood. Although the Tories stick to defending UK Government policy, other MSPs show a good understanding of the realities of the benefit system, which they will have had ample opportunity to get familiar with through casework for their constituents. Indeed SNP and Labour MSPs appear to be competing to demonstrate their empathy. We can only hope that this positive competition encourages maximum use of Scotland’s limited devolved powers.