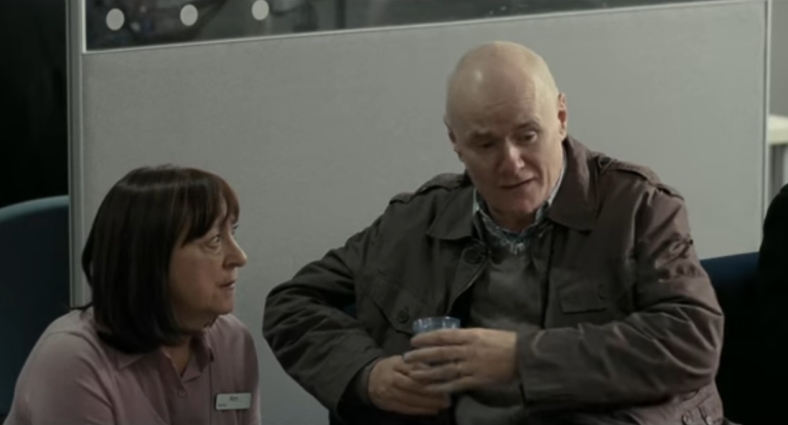 Yesterday I read an article from an American paper pointing out how the men and women working in the airports accommodated to Trumps immigration rules, even handcuffing children. Anyone familiar with the UK benefits system will find that unsurprising. The people behind the desks at the jobcentre are mostly normal men and women, yet every week they are doing things that make other people’s lives difficult, if not impossible.

Someone told me that her friends at church had been critical of the film ‘I, Daniel Blake’, and when I asked her why, she said that they worked in the jobcentre and thought the film unfair to jobcentre workers. Daniel Blake sees two jobcentre workers, one who is officious and one (pictured above) who is kind but harried by a system that doesn’t let her actually help. Research for the film included talking to people who had worked in the system. Are these church-going  jobcentre workers effectively blinkered to what is happening? People on benefits are put under constant pressure to do various tasks that take up their time and effort but often have little relevance to their chances of finding a job. With the threat of sanctions always there in the background, even soft pressure is stressful. But few jobcentre workers engage with the reality of what they are asking people to do. If they did, they would probably have to stop working for the DWP – as some have done. Rather, they limit themselves to acting as a human interface with their computer, and not thinking outside the system’s boxes. This bureaucratic mind-set can lead people to have to check with their manager whether someone on life-support in hospital can be excused a sanction for not coming to sign on – as actually happened when a friend’s mum reported his uncle’s illness to Govan Jobcentre.

On top of the systemic punishments and humiliation, a huge amount of extra stress and suffering is caused by errors. The amount of vital information that just gets lost is frightening. These are mistakes and not deliberate actions, but the extent of errors that can cause havoc to people’s lives demonstrates a systemic callousness towards the people that the system is ostensibly meant to help. If this was a system where errors caused havoc to rich men’s bank accounts rather than the lives of benefit recipients, the people in charge would be brought publicly to account. Recently, on a phone call to a DWP call-centre to sort out a string of such errors, I found myself talking to someone who was so genuinely solicitous that I was quite taken aback – as was the person whose case I was trying to sort. Kate didn’t usually work in that department, and she explained that it was difficult to piece together what was happening because information was on four different computer systems that didn’t talk to each other. Kate went beyond the call of duty that day, and yet her normal job is as a decision maker for Work Capability Assessments, where she will have to work within some of the most inhumane box-ticking rules of them all.

I wonder if any DWP workers saw parallels with their position and that of the US border control staff – and if it made them question their acceptance of their daily work. Many of them are members of the PCS union. They will remind you that trade union legislation doesn’t allow them to take industrial action over issues not directly related to their own employment conditions – but trade unions wouldn’t have won acceptance at all if they had not been prepared to go beyond the law in the past, and if we are to see an end to this punitive system, it has to be made unworkable. We are not calling for individual martyrs – we need organised united action.