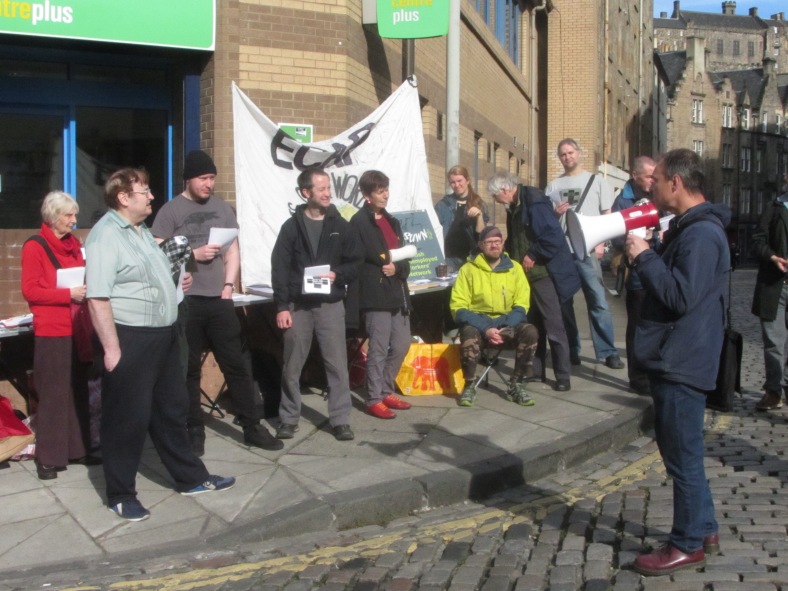 Yesterday Edinburgh’s High Riggs Jobcentre provided another excuse for activists to gather together from across Scotland and share solidarity and practical experience. As on previous occasions – and despite previous apologies from the manager – we were protesting the jobcentre’s deliberate flaunting of the DWP’s own rules that clearly state ‘Customers have the right to ask a representative to help them conduct their business’. A month ago the jobcentre not only refused to allow a rep from Edinburgh Coalition Against Poverty (ECAP) to accompany a young man to his interview, but also refused access to his father and called the police. You can read the details here. So we were back again – activists from Dundee and Glasgow as well as from Edinburgh – to show our support for ECAP and make it clear that this was not acceptable and would not pass unnoticed. Among the protestors was another father who had been prevented from accompanying his child. There were relatively few people going into the jobcentre so we suspect that they had deliberately avoided making appointments for the time of the protest. The picture shows Tony Cox from the SUWN stressing the importance of more people getting involved in frontline work so as to make it more difficult for the DWP to respond in this high-handed fashion.

Today we were back outside the buroo in Dundee, and as on the last few occasions, although most people were glad to take our leaflets, few needed our help. We hope that this is a genuine reflection of better treatment overall and not just a response to our presence and because issues are being referred directly to the welfare rights officers inside. There’s some debt advice sessions in there too now, organised by Christians Against Poverty. More worryingly, the Home Fundraiser recruiters, who used to pounce on people inside, have now been allowed to recruit in the buroo itself. ‘Home fundraising’ means being out in the cold and wet, getting doors shut in your face – so nobody should feel under any pressure to accept such work. The mere fact that they are inside the jobcentre could make people feel under pressure to sign up.

On a more positive note, we have found out that the proposals to weaken the tribunal process reported in Benefits and Work should not apply in Scotland.