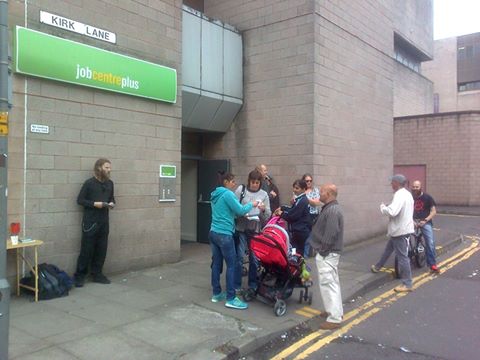 Bairns can be very perceptive, as the above comment, fae a wee mite emerging fae the gloom of Dundee jobcentre and into the summer sunshine, testifies. We weren’t able to get to the bottom of his problem with the buroo, but plenty of other people were only too willing to unburden themselves, in no uncertain manner. Traffic was, like last week, worryingly busy, with complaints regarding treatment at the hands of (Work Programme Provider)Triage dominating discussion. We heard from two people who had been sanctioned as a result of missing appointments at Triage – the single biggest reason for sanctioning that we come across. Andy is a middle aged man with blood clots in his legs, who had recently been bumped from ESA, and who had went through two previous sanctions. He was distraught at being sanctioned for missing an appointment he had not been given, had missed the deadline for appealing, and saw little point in doing so, anyway. In the course of chatting to us, Andy explained that he had previously appealed sanctions and had got nowhere. However, when we dug a little deeper it became apparent that he had only went through the Mandatory Reconsideration stage, and, when this was refused, had given up because he thought he had exhausted his options. We explained that he should have taken his appeal to an independent tribunal, where he would have a much better chance of winning, as his case would not be judged by a DWP ‘decision maker’. After further discussion, we urged Andy to consider a claim for PIP, as he complained of constant pain and restricted mobility due to the blood clots in his legs. We provided him with the PIP number and explained the application process to him, and provided him with info of welfare organisations that can help him with filling in the PIP form, which is absolutely essential as these forms are designed to trick and trip up claimants.

On Thursday, we also met a mother who was accompanying her 19 year old son into the buroo. Whilst he was too angry to talk, his mother explained that he had been sanctioned for two weeks for missing a Triage appointment, and had only just been informed that he had received another four week sanction, but with no reason given. Whilst they had been informed about hardship payments, they were unaware of how the appeal process worked. We explained the importance of appealing, and the consequences of not doing so – yet further sanctions, as you are marked as sanctionable. On Monday we had met Steve, in his late twenties, who reported that he had also been threatened with a sanction from Triage. He had phoned to re-arrange an appointment with them as it clashed with a community work appointment, which he was legally obliged to attend. He was informed by his Triage advisor that he was also expected to attend the appointment at the Triage office, and that if he didn’t he could expect to be sanctioned. We urged him to provide evidence of his community work appointment to Triage, along with a letter complaining about his treatment, and asked him to keep in contact for advice and to let us know how his case was going. In addition, we also heard from a couple of people who complained about being made to wait long periods for pre-arranged appointments at Triage, with waits of up to an hour and beyond being reported – this from an organisation (sic) that regularly sanctions people for turning up five minutes late to an appointment.

In other notable cases, on Monday we heard from Mandy, a young mother on IS, who had had her payments stopped when she was admitted to Carseview on two separate occasions over a month long period following mounting mental health problems. She was extremely upset when we met her, but we were able to calm her down, and provided her with advice on the appeal process – she was aware of the hardship payment scheme – and details of welfare organisations she could approach for more help, as well as urging her to raise the issue with her ‘key worker’ at the social work dept. Finding out that her claim had been closed, and the worry that she could not feed her children had hardly helped her depression, but she was in a better place after speaking to us. We could only shake our heads at the heartlessness of a so-called ‘welfare system’ that could treat vulnerable people in such a cold manner.

On the same day, we also met Steve, who is on ESA, but who had been urged by his social worker to apply for part time work. When he had found a job of 12 hours per week, he had been informed by the jobcentre that his ESA claim would be shut down. Steve, who suffers depression, was put into a tailspin by this news, despite the fact that these working hours are within the ‘permitted range’, so there was no basis for a sanction. We urged Steve to raise the issue with his social worker and to complain about the incompetence of his, so-called, ‘advisor’, and the stress and anxiety that this example of bureaucratic numptydom had caused him.

This is by no means exhausts the cases and inquires that we came across at our stalls on Monday and Thursday, which continued the rising pattern of traffic we experienced last week. It seems it might be a ‘long hot summer’ on the front line of the war against welfare reforms and the monstering of the unemployed.

Thanks to Susan, Sarah, William, Chris, Gary, Fuzzie, Jenny, Grant, Gordon and Tony for helping out at the stalls – all names in this report have been changed.

One thought on “‘I don’t like this place, Daddy’”