High Riggs Jobcentre in Edinburgh was taught a lesson in solidarity yesterday as a crowd of protesters from across Scotland came to support Bob from Edinburgh Coalition Against Poverty (ECAP) and Chris the unemployed man that Bob has been helping. Chris is one of the people that the Jobcentre has picked on to give a particularly hard time, so ECAP has stepped in to assist. ECAP and High Riggs have a long history, with the jobcentre repeatedly trying to deny people their right to be accompanied, and then having to back down and apologise when shown to be breaking the DWP’s own rules. On previous occasions there have been long stand-offs with the police. Two weeks ago the jobcentre got their own G4S security guards to do the dirty work. ECAP explains: ‘When the claimant and his accompanier attempted to enter, four G4S security guards blocked the way, physically separated the claimant from his accompanier and asserted that the claimant had no right to be accompanied. The four volunteers leafleting came to the door to insist on the claimants rights and were physically assaulted and menaced by the security guards.’

Yesterday was Chris’s next visit to the jobcentre. And this time, with so much support outside, Chris (right) and Bob were able to report a rather different reception. In fact, a noticeably relieved Chris told us that he was no longer going to have to see the ‘job coach’ who had attempted to change his agreed Claimant Commitment without consulting him, and that he had been assigned to a different person. 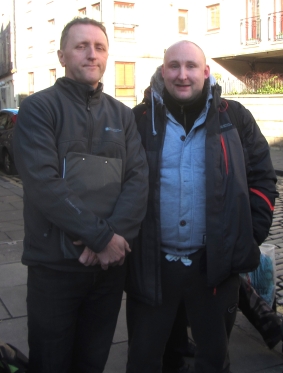 Tony from the SUWN shared with everyone the problems he has had with officious officials in Arbroath and Dundee, which have led to us to become experts on the comparative practices of Forfar and Dundee Sheriff courts; as well as stressing the need for more of the kind of advocacy work we were all there to defend. And Grant led the chanting – which added to the more tuneful noise from Rhythms of Resistance.

Once again the DWP has provided an opportunity for activists to strengthen the bonds that link our different campaigns – and we were pleased to meet up with old comrades and new from Glasgow, Stirling, Greenock and Angus as well as from Edinburgh. We look forward to seeing many of them again in Dundee on 9 June for Tony’s appearance in court for daring to accompany someone to their Work Capability Assessment. 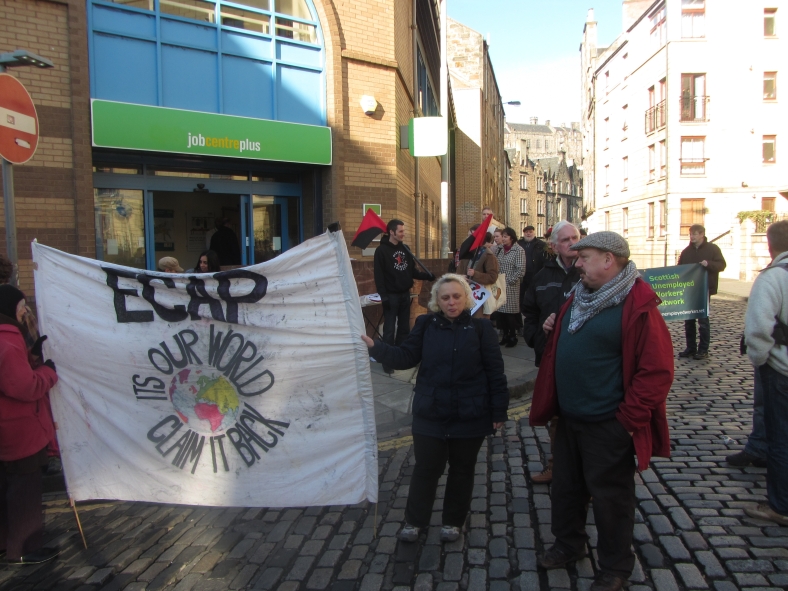 As we have said many times before ADVOCACY IS NOT A CRIME. You have a right to be accompanied to your interview, and for the person with you to help you put forward your case. That person does not need to give any ID to the jobcentre (or assessment centre), though the DWP may confirm with you that you want them to be there.

(Edinburgh was looking awfy bonnie in the sunshine and we also found time to complete our day in our capital city with a visit to the excellent Celtic exhibition at the National Museum – activism, camaraderie and culture!)

4 thoughts on “The power of solidarity”