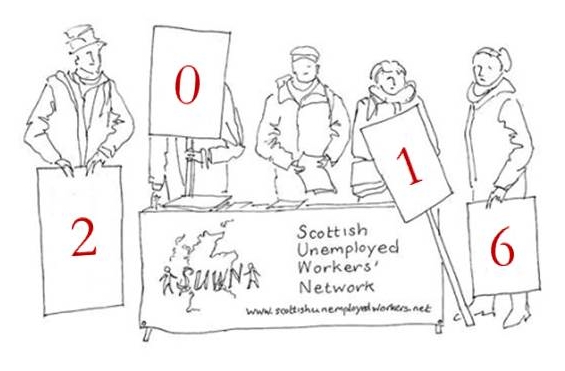 Best wishes for 2016 from an SUWN that’s more active than ever, but faces an ever bigger task. Few of us foresaw that 2016 would see us under a Tory government, and the thought of the further destruction that this no-holds-barred band of toffs will try to inflict on our society in the next four years is frightening. They regard the world as their plaything, and look on the poor – and especially the unemployed and the disabled – as lesser beings. At the same time, despite the best efforts of our abject media, more and more people are waking up to what is happening. We have played a small part in this growing awareness, as well as giving practical support and help to a small fraction of this regime’s victims.

This is a start, but it is nowhere near enough. We, as a society, need to draw a line in the sand and refuse to sit back quietly while they pillage and destroy. The attack on welfare cannot be allowed to continue. We cannot sit by while thousands are reduced to destitution and thousands are forced to work unpaid for bare subsistence, and while countless more face abuse and humiliation at the hands of our own government agencies. We need an army of activists, but we – and our comrades in other organisations – are only a small band of (non-violent!) guerrillas.

Even so, the state has not made it easy. We began this last year with the arrest of one of our activists who was helping a vulnerable woman in her encounter with Arbroath Jobcentre, and although, after hearing the ‘evidence’ the prosecution ended up withdrawing the charges, we begin this year with another court case after Tony was arrested again when attempting to accompany another woman to her Work Capability Assessment. (They refused him entry because he had insisted on the basic right to take notes on a previous occasion.) All this attention and police time suggest we must be successfully rattling their cage, and we will continue to do so! Our activists are continuing to accompany folk into jobcentres and assessments, helping ensure that at the very least the DWP keeps within their own rules. (And the two women both got the outcome they were hoping for.)

If these arrests are designed to sap our energy and paint us as untouchables they have not succeeded. The support we have had from folk right across the world has been inspiring, and there were protests at jobcentres across Britain on the day of Tony’s court case. Our only possible response is to develop more activists and use the publicity to draw attention to the iniquities of the system we are fighting. No-one said it was going to be easy – but we’re discovering the true meaning of comradeship. (And if this message isn’t as coherent as could be, blame that SUWN Hogmanay party.)