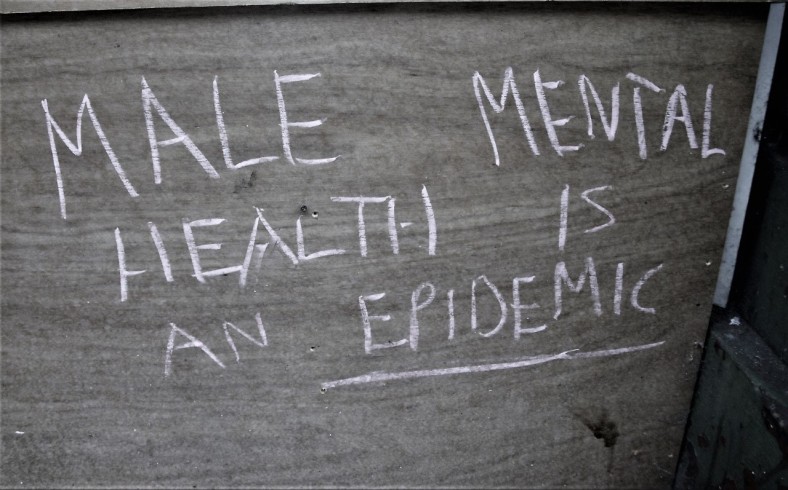 We are constantly being told that mental illness is an epidemic. Indeed it is. Especially among men.

Last year the UK Government created the much-ridiculed position of ‘Minister for Suicide Prevention’. Since 2011 they have collected statistics on happiness and ‘wellbeing’. To those with real mental health issues these derisory public relations stunts are insulting and ultimately meaningless.

Back in the real world, we all know that economics is a major cause of the UK’s mental health crisis. The link between poverty and poor mental health is indisputable fact. We all know this link: money is survival. Money means shelter. Money means warmth. Money means food. Without these basic needs met, human beings cannot survive. If we cannot achieve these basic needs, we worry about them and we are anxious. Prolonged mental anguish leads to mental illness, chronic anxiety, depression and, if left unchecked, suicide.

This is why benefit sanctions are so scandalous. Sanctions take away the means of survival. People literally worry about where their next meal is coming from. In the deep past our hunter-gatherer ancestors had to contend with these worries on a daily basis. Eventually our species invented agriculture. Agriculture meant being able to store food so we had enough to eat during lean periods. In today’s world of plenty, it is appalling that anyone goes hungry. That it happens as a result of government policy in a rich country like the UK is nothing short of immoral.

The DWP accept that in certain circumstances poor mental health can mean you are unable to work or even that you are fully disabled. Actually proving this is incredibly hard work. It is stressful in itself, and they make the system even worse, to the point where it feels like torture.

Recovering from depression is a long and fragile process. Just about anything can trigger a relapse, including the DWP deciding to re-evaluate your case. One associate of the SUWN suffers chronic depression. His condition means that he is unable to work, and he claims Employment and Support Allowance. The DWP recently put his ESA case up for re-evaluation. The appointment letter for his assessment arrived, and he spent the following two weeks lying on the sofa unable to think about much else. He now has the agonising wait for the decision. If that decision goes against him, his income will disappear, and he will be unable to support himself. He will also face the stress of a Mandatory Reconsideration, and possibly an appeal. NONE of this is conducive to him recovering from a serious depressive illness, nor, indeed, will it help him get employed.

He’s far from the only one suffering from the stress of trying to survive. At this week’s SUWN stall another man picked up one of our leaflets and asked about renegotiating his Universal Credit loan repayment. Another asked about hardship payments. In the end both men were sent off in the direction of Dundee Council’s Welfare Rights team. Two separate women at the stall asked about the process of applying for PIP, both are getting help from other sources, so there was little more we could do to advise them. Away from the stalls, the SUWN helped another woman fill in her PIP form, as she is being transferred from DLA. It is always good to see that people are asking for help, and that they are not suffering alone.

But, these people should not have to suffer at all. The stress that people are under can only lead to a worsening of their mental and physical health, and add to the mental health crisis that the Government claims to be addressing. Take away someone’s money, and you take away their means of survival. Uncertainty about the next meal leads to anxiety. Chronic anxiety leads a mental health crisis. If the UK Government really wanted to address mental health, they could start with a serious look at the chaos they have created within the benefits system. It really is that simple.

If you are feeling down or stressed and need someone to talk to try: