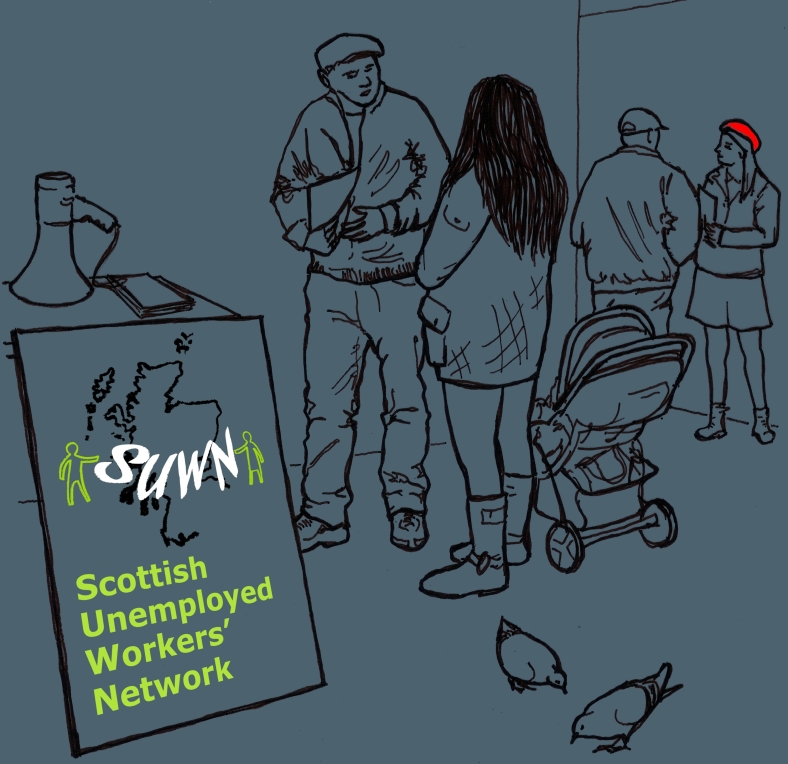 If articles calling for the end of Universal Credit translated into resistance on the ground, then this cruel system would be history. But of course it doesn’t work like that. The fight against the attack on social security, of which UC is the flagship, does have the potential to become a rallying cry for major social change, but only if this is understood and taken up. The cuts are affecting more and more people, and, for the first time anywhere, people in low-paid work who rely on benefits to have enough to live on are becoming subject to the punitive sanctions regime. But there is no single action that claimants can take to disrupt the system in the same way as people withheld their Poll Tax, and we can’t do anything that might prevent people receiving their vital payments. The only group who could carry out concerted targeted action is the PCS, the union for DWP workers, and they have resisted all calls to intervene as this would require them to run up against Thatcher’s anti-union legislation. But that doesn’t mean we can do nothing.

As France is showing us, history can move quickly. There is a lot of anger against the current system, and we can help direct it against the architects of this politically inspired austerity and the brutal regimes they have created. We have long argued that ‘welfare’, and the need to support the poorest and most vulnerable members of our society, could and should have been taken up as a rallying cry for a new Independence campaign. Instead all politics seems to have got lost in the byways of the debate around the EU, for which there seems little sign of an imminent end point of any kind. However, those basic bread and butter issues have not gone away. The fight against the destruction of our welfare system only grows in importance, and we will continue to ensure that no-one can forget it.

We hope that all those articles – as well as personal experience – will inspire more people to take up this fight, and for those who are wondering ‘but what can we do?’, we thought it might be useful to outline, again, the approach we have been taking. All our activity can be divided into three levels.

Every week, for over four years, we have had a stall outside Dundee jobcentre (and for some of that time also stalls in Govan and Paisley) where we have been able to talk with folk going in to sign on. We are acting as a sort of welfare rights sans frontiers, and because most of us are, or have been, in a similar position to the people we are talking with, we also provide mutual solidarity. Unlike the professionals, we also accompany people into meetings and assessments. Over the years we have been able to give support and confidence to a great many people, but this work is about more than that. It gives us a real understanding of what is happening, and it enables us to pass this understanding on to a wider public. Our regular blog provides useful information to those struggling through the system, and it also informs others about what is going on and why it matters.

Of course we have to make sure that any advice we give is accurate. We keep up to date with the main questions that we have to deal with, and ask the experts at the Child Poverty Action Group when we get stuck. And we have a list of office-based advisors we suggest people go to for further help. Central to this is our advice leaflet, which covers the basics and which we hand out to everyone going into the jobcentre. Particularly since the introduction of Universal Credit, we have caught the DWP making a large number of damaging errors. (For anyone thinking of doing similar stalls, you can download the leaflet here, and we would be happy to give advice on how to get started.)

Although the Tory government continues to ensure that the ‘welfare’ system gets worse, and we still hear accounts of bullying and intimidation, many people who come out of Dundee Jobcentre now assure us that they have been well-treated by the people working there. This was far from the case in the past, and we feel that it cannot be a coincidence that this change of approach has coincided with four years of campaigning scrutiny.

We know that, ultimately, our political and economic system needs to change, but meanwhile there are meaningful reforms that we can fight for. These can be beneficial in themselves, and they can help build a movement for further change. We have helped highlight the horrors of sanctions, and we have helped to name and shame employers who are exploiting unpaid labour – both big companies and also local charities. (When it comes to the latter we try and engage them by letter first before putting a protest outside their door.) We have also lobbied politicians and councillors, responded to public consultations, and presented a petition to the Scottish Parliament. We always make clear that we know the cuts come from Westminster, but we believe that the Scottish Parliament can and must do more to help mitigate them. Our petition calls for more help in the budget, paid for by more progressive taxation. Specifically we have suggested that they provide more money for the Scottish Welfare Fund and for Discretionary Housing Payments (both funds that can be targeted at those most in need) and we have supported the call for a top up to child benefit. The draft budget will be announced on Wednesday. I expect we will be disappointed, but we will go on pushing these issues.

Looking at the bigger picture

At the same time as fighting for small changes we try and ensure we don’t lose sight of the bigger political and economic picture. Our economic analysis and our call for a Universal Basic Income (most clearly set out in our book) are inspired by our experiences of the realities of the current system of exploitation and punishment.